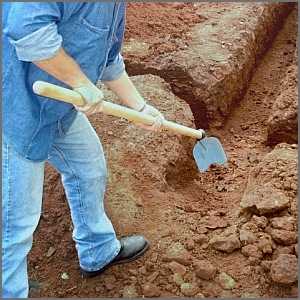 This is adapted from (apparently) a true story.

An elderly couple retired to the countryside – to a small isolated cottage overlooking some rugged and rocky heathland.

One early morning the woman saw from her window a young man dressed in working clothes walking on the heath, about a hundred yards away. He was carrying a spade and a small case, and he disappeared from view behind a copse of trees.

The woman thought no more about it but around the same time the next day she saw the man again, carrying his spade and a small case, and again he disappeared behind the copse.

The woman mentioned this to her husband, who said he was probably a farmer or gamekeeper setting traps, or performing some other country practice that would be perfectly normal, and so not to worry.

However, after several more sightings of the young man with the spade over the next two weeks the woman persuaded her husband to take a stroll – early, before the man tended to arrive – to the copse of trees to investigate what he was doing.

There they found a surprisingly long and deep trench, rough and uneven at one end, becoming much neater and tidier towards the other end.

“How strange,” the old lady said, “Why dig a trench here – and in such difficult rocky ground?” and her husband agreed.

Just then the young man appeared – earlier than his usual time.

“You’re early,” said the old woman, making light of their obvious curiosity, “We wondered what you were doing – and we also wondered what was in the case.”

“I’m digging a trench,” said the man, who continued, realizing a bigger explanation was appropriate, “I’m actually learning how to dig a good trench, because the job I’m being interviewed for later today says that experience is essential – so I’m getting the experience. And the case – it’s got my lunch in it.”

He got the job.

(initiative, self-development, making things happen, career advancement, how to get a job requiring experience when you have none)

(Adapted from a suggestion – thanks R Columbo)